Serling was an ex-Army paratrooper unhappily employed in Cincinnati broadcasting when he began mailing in spec scripts to the New York-based live anthologies. "Patterns," his searing expose of big business ethics, was the seventy-second teleplay to roll off his typewriter. A national sensation, it launched him into a rarefied plane of above-title television writers. "For sheer power of narrative, forcefulness of characterization and brilliant climax, Mr. Serling’s  work is a creative triumph,” wrote Jack Gould of the New York Times. Barely thirty, Serling greeted his overnight breakthrough with ambivalence—had he sold out, or merely allowed himself a measure of personal expression? Much of his subsequent work dealt with professional men struggling to reconcile the moral, ethical, and psychological tolls of ambition, success, and foisted expectations. It's a theme particularly evident in "Reqiuem for a Heavyweight" and "The Comedian"—which together with "Patterns" brought Serling an unprecedented three consecutive Emmy Awards. His fourth came with The Twilight Zone. 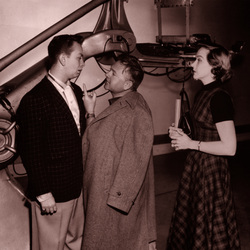 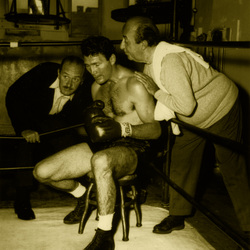 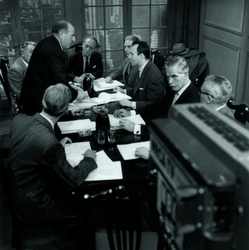